Potassium, like its closest chemical element i.e. Sodium, have been known since antiquity and have been used in various fields of human activity. Potassium is a chemical element that is numbered 19 in the Periodic Table of the Elements.

What is the symbol of potassium?

This is a reference to the method of preparing potash. Indeed, since antiquity, it has been obtained from plant ashes brought into contact with water in which soluble compounds dissolve and in particular potassium carbonate, the resulting solution is then filtered and then placed in a pot, so that the water evaporates and potash is formed.

It should be noted that at that time the term potash designates calcium carbonate while today it corresponds to a solution of potassium hydroxide. Regarding the symbol "K" it derives from the German name of this element "kalium".

The name potassium was proposed in 1807 by the discoverer of this element. So now question is-

Some compounds, such as potash, have been known and used since a very old time but potassium was not identified as an element until 1807, when the British chemist Humphry Davy carried out the electrolysis of molten potassium hydroxide and obtained a still unknown metal.

Potassium was the first metal isolated by electrolysis, the decomposition of a chemical body under the effect of an electric current.

Potassium, with atomic weight 39.098 and atomic number 19, has the fundamental electronic configuration of 1s22s22p63s23p64s1. Also you can write potassium electron configuration in abbreviated form i.e. [Ar]4s1.

Potassium has total 19 electrons, we fill the electron shells as below: 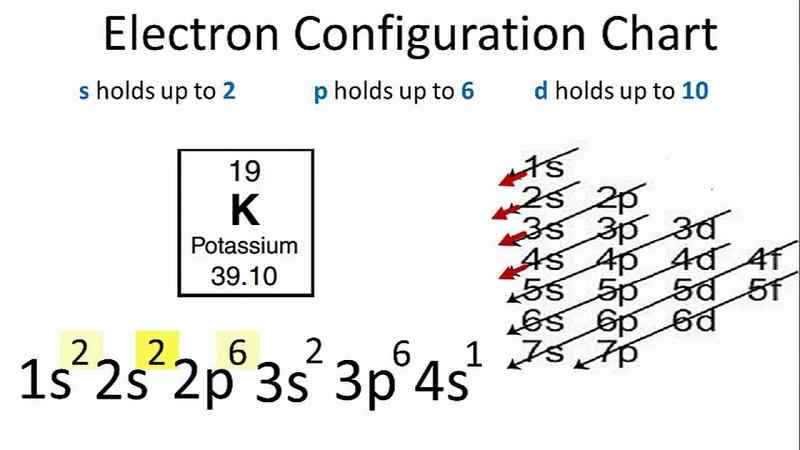 However, potassium is not a native element since it is obtained, at least mainly, via the electrolysis of potassium hydroxide in a molten dry process. It is moreover this process which was discovered and used by Sir Davy.

There are many minerals composed of potassium such as:

Physical and chemical properties of Potassium

Potassium as a single body

It is a greyish metal, very soft, ductile and above all very reactive since it is one of the most reducing metals. It comes in a metallic form which can be obtained by electrolysis but which does not exist in nature.

Potassium is a very light, silvery white alkali metal, and it is very reactive with water.

For plants, the potassium ion plays an important role in maintaining osmotic pressure and in certain metabolic processes such as plant growth.

It is the most common form in which potassium occurs in nature.

All potassium compounds are ionic in nature:

Potassium has 24 isotopes with a mass number between 32 and 55. In addition to these isotopes, potassium also has 4 nuclear isomers.

However, natural potassium is only represented by 3 of its isotopes:

It is important to note that potassium 40 is able to decay, producing beta+ and beta- radiation.

Below are some of the common uses of potassium:

What are the oxidation states of potassium?

What is the valency of potassium?

The number of chemical bonds by which a given atom is connected to other atoms is known as valency, potassium atoms in compounds exhibit valence I.

What is the Ionization energy of potassium?

What are the four quantum numbers of potassium element i.e. K?